With a combined experience of more than seventy years among its partners and the benefits of belonging to the Mexican Bar Association and the State Bar of New York, this Thursday the law firm of Tapia Zuckermann Abogados opened its new offices. “We provide legal services principally to foreign investors established in Los Cabos and Baja California Sur” stated the managing partner, José Eduardo Tapia. In addition, he mentioned that “with New York credentials, a greater level of knowledge is attained and clients, mainly Americans and Canadians, appreciate this as it signifies full confidence in the advice given because two distinct legal systems: Mexican and that of the world’s commercial capital, are taken into account.”

The attorney mentioned that in the Los Cabos area there are some good law firms but there are still segments of the population to be tended to in an integral manner. Such segments desire to have serious, competent and bicultural counsel, not only bilingual. There are many foreigners residing in Los Cabos; therefore, belonging to the New York Bar and also be licensed in Mexico is a definite plus.

As for practice areas, the firm handles mainly real estate matters, civil and commercial litigation, immigration and amparo suits (a Constitutional action akin to a habeas corpus or an injunctive relief proceeding in the US). The firm also caters to the local market and has among its clients Mexican companies and individuals.

After residing in Los Cabos eight years, Mr. Tapia, Esq., a third-generation attorney after his grandfather, Enrique Tapia Aranda and father José Enrique Tapia P., founding partner of the firm, who practiced and still practice, respectively, law in Mexico City, mentioned that “Los Cabos represents a great opportunity in a small but attractive resort city, both in terms of geography and investments. This means an interesting challenge for success as compared to other more established, larger and competed markets. “In fact, he went on to say, last year we represented the seller of a single-family home in El Dorado which established a record in the real estate history for individual dwellings in all of Mexico as it sold for more than 44 million dollars.”

Located in Plaza Peninsula, in San José, the inauguration of the new offices of Tapia Zuckermann Abogados was accompanied by many distinguished attorneys and members of the judiciary. 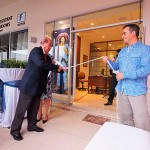 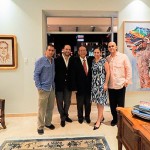 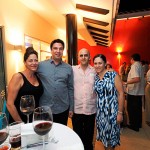 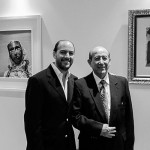 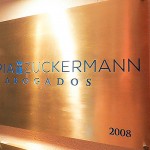 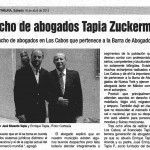 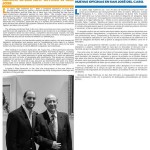 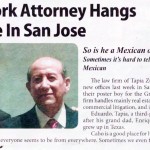